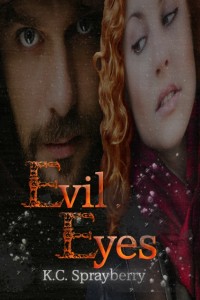 Lisa is so ready for a break from the grueling first semester of college. Along with five other friends, she returns to Landry, and hopes to have nothing but fun. Within days, one of the group is the victim of a vindictive stalker, and Lisa herself is now in the man’s sights. No matter what she does, she can’t shake this person.

Fred has a little problem, but he figures he can take care of it himself, if he achieves fame with his folk rock band, Olney-Oak Lane Sounds. Then he happens to see this beautiful woman, who turns out to be just like every other woman he’s met. He takes care of her, and is immediately drawn to Lisa. No one will get between Fred and Lisa, absolutely no one.

On Christmas Eve, Lisa has to fight for her life and sanity after Fred kidnaps her. She turns out to be very different from the other women, in a way he never figured.

She’s hot, has gorgeous two-toned hair framing a face that belongs on an angel. You dated a few times, even seemed to get along, but then you moved on. Problem is you work in the same office, and she’s always humming “Call Me” or holding her hand up by her ear as a hint that you give her a ring sometime.

You’re so over her. Aren’t you the man? The guy who loves ‘em and leaves ‘em? Who does she think she is? So, you ignore this woman. She’ll get the message.

The first text startles you in the middle of an important client meeting “Drinks, sweetie?” You ignore it. To your utter embarrassment, she sends text after text, until you turn your phone off in desperation.

By the time you turn your phone back on, there are over 30 texts and a couple of voice mails. You’re determined to nip this problem in the bud, so you confront the woman. “Get over it. There isn’t anything between us.”

Tears dribble from her eyes. You walk away. You’re not a heel. She deserved the curt reprimand. Why can’t she get the message?

That night, as you’re drifting off to sleep, your phone alerts you to a text. It’s from her. Your eyes roll nearly out of your head. Again is your thought.

The situation escalates until you can’t concentrate. Your job is suffering from her continual contacts. Finally, she sends a text “No one else will have you.” You approach your boss, feeling like a fool. The boss tells you to file a police report and suggests that you change your phone number. The woman is fired for her inappropriate actions.

Is this woman a stalker? Yes. Nothing serious has happened except her inability to walk away from a disinterested male, but she crossed the line by text-bombing his phone. Is losing her job right? Ask yourself if you’d want someone working with you who can’t move on from the end of a relationship?

Stalkers come in many shapes and forms. They can be the guy who looks totally sweet, a pretty girl with everything going for her. Men stalk both women and men, women do the same. Teenagers even experience this horror.

What can you do if you believe someone is stalking you?

KC Sprayberry started writing young, first as a diarist, and later through an interest in English and creative writing. Her first experience with publication came when she placed third in The Freedoms Foundation at Valley Forge contest while in the Air Force, but her dedication to writing came after she had her youngest child, now in his senior year of high school.

Her family lives in Northwest Georgia where she spends her days creating stories about life in the south, and far beyond. More than a dozen of her short stories have appeared in several magazines. Five anthologies feature other short stories. She has three books that are Amazon best sellers: Softly Say Goodbye, Who Am I?, and Mama’s Advice. Her other novels available are: Take Chances, The Ghost Catcher, Family Curse … Times Two, Secret From The Flames, Where U @, The Wrong One, Pony Dreams, and Grace. Her romantic suspense novel, Starlight, releases May 2, 2014 from Muse It Up Publishing.