Just finished reading Maggie Thom’s, Captured Lies, and was so excited to host her on my website! Her mystery/thriller book is available now! Reviews will be posted soon! 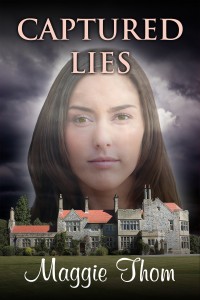 Her life was a lie!

Bailey knew her upbringing wasn’t normal but she’s worked hard to stabilize her life. At 29, she finally has a good business, a stable home; her life is miles from that of her childhood. Then suddenly her mother dies, leaving a gaping hole and a discovery that they may not even be related. If Guy, the private investigator is to be believed, her life is a lie. Using the skills she learned on the streets, Bailey travels back through a sketchy and dangerous past, to find answers. Dodging bullets, staying ahead of those who want her dead and convincing Guy she can do it alone, are making it difficult to discover not only the secrets of her mother’s past but that of a family claiming she is theirs.

Everyone seems to have a story… but who’s telling the truth? And who wants her dead? Is Guy part of the solution? Or part of the problem? To discover the facts, she’ll have to untangle a web of deceit, lies, and secrets, dating back over thirty years.

But can she do it in time…

Read ahead to find out all about Maggie, her future books, and get a sneak peek into Captured Lies!

Tainted Waters, my second novel was just published in April. He didn’t commit suicide but who’s going to believe her…

And I am working on my third novel, Deceitful Truths which is a standalone sequel to Captured Lies. He’s created a legacy that no one could imagine…

What is your favorite genre to write? Read?

Suspense is my favorite to read and to write. I love story that has a lot going on, keeps you guessing but also takes you on an awesome journey that you’re never quite sure where it’s going to take you. To be honest though I read almost every genre. As long as the story is interesting and compelling, I’ll read it.

Who is your favorite author? Book?

I have several authors who are my favorites but my very first favorite author had to be Stephen R Donaldson who wrote the Thomas Covenant Series. I absolutely loved that series, although it was many years ago I read it, I still remember it. I have to say though that I have found some new authors that I have really enjoyed their books – Victoria Bernadine, Jessica Tornese, P.M. Terrell, David M Brown, Virginia McKevitt – to name but a few.

What is the hardest part about writing a book?

Good question. The funny thing is I don’t think there is any one answer. On a given day it might get a different response.

Truly though I think making sure all the loose ends are tied up and that all the events within the book are believable and suited to the character and to the story. It’s so easy as an author to just let your mind go and be wild and creative but ultimately you have to figure how and when to reign that in so that you story is compelling, interesting and something the reader will enjoy, understand and believe.

What character in your books are your most proud of?

All of my books have a strong, independent female lead. Although each of them is very different I think they are all quite believable, compelling characters.  Bailey is the female lead in Captured Lies. Her life is quite a journey, homeless, life on the run and then to discover her life was a lie… and I think people can really relate to the roller coaster she goes on and her struggles with not doing everything herself and being okay with asking for help or at least accepting it. She’s very real and believable and people get a clear sense of who she is. I know for me she is the one I think I’m most emotionally attached to. She came to me at a time when my life wasn’t so great, so it was awesome to be able help her make it through situations far worse than mine were.

I also have to say Geoffrey (from Captured Lies), who is Bailey’s uncle, is quite a depraved soul but quite memorable. People are asking what really happened to him. All I can say is you’ll have to read Deceitful Truths to learn that.
Anything else you want readers to know about you?

I love to write. It’s one of those things that is such a habit that if I have five free minutes I’ll pull out a pen and paper and write down something – a new story, new ideas, something to do with what I’m currently working on. It’s almost something I can’t             control.

When I’m not writing I love to read (so if you know of some good books, let me know), spending time with my family or being out in nature. My favorite hike is one that ends in waterfalls.

Maggie Thom took the challenge and leapt off, leaving a fulltime, twenty year career in management, to write full time. After her initial panic that she might need a straight jacket, she published her first book Captured Lies, October 2012. And now is excited to release her second novel, Tainted Waters, April, 2013. Her third book, Deceitful Truths (sequel to Captured Lies), available fall of 2013. An avid reader and writer her whole life, she decided to break the monotony of wishing to be an author by making it happen. Married to her best friend, she is learning that humor, love and patience help her navigate her way through her twins’ teen years. Her motto: Escape to read and Read to escape. “Maggie Thom writes a fast paced thriller laced with romance that keeps the reader interested and on edge!” InDtale Magazine

Rubbing her face with her hands, she tried to remove the dried tracks her tears had left. Here, she’d been happy. Any flashes she had were of her smiling, giggling, running, playing. Those were not memories that she generally had of her childhood. Until she’d found this place, she’d never known she’d had moments like that. The pictures on the walls of Lund’s office had started it. The memories had flooded back so fast, she’d almost been paralyzed. She didn’t know what she’d find but she knew that she had to find this place. The sketchy details she’d gotten from stuff in his office had sent her to Jasper. The Jump Drive had given her the rest of how to find this area. What was this place? And how come they stopped going there?

“Bailey, get back from the water.”

“Yes there are lots, Bails. Now come back from the edge.”

“Noooooooooooooooooo. Momma.” She cried and she screamed and stared out the back window of the car as they drove away.

It had become the routine of her childhood. Only she’d learned to stop screaming. At least so anyone could hear. Wiping her hands over her cheeks she removed any traces of her emotions before sliding down off the rock, careful to be quiet so as not to disturb Guy. He had his eyes closed. She just couldn’t tell if he was sleeping or just enjoying the quiet solitude. She walked to the edge of the stream. Scooping up some water she splashed her face. The chill of the recently thawed stream penetrated her dulled senses.

As she stared down, a memory flitted at the edge of her thoughts, like the quick vibration of the humming bird’s wings. Very quick and elusive. Placing her hand on the edge of the rock she walked around the other side, stepping carefully over the snow so she wouldn’t slip on the hidden stones and shrubs that lay underneath. She headed back to the cabin. The pull from it had been incredible when they’d first arrived but she’d known that she hadn’t been strong enough to go in there yet. Something told her there were answers inside. She just wasn’t sure she was ready for them.

Maggie can be found at:

Captured Lies is available to buy at:

One thought on “Author Maggie Thom”