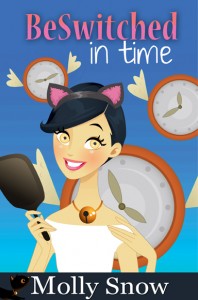 Author Molly Snow joins us this week with her tween/teen series “Beswitched”. Her books are fun and perfect for one of those summer reads on vacation.

Synopsis- As a magical black cat, Surla’s used to switching bodies with lonely souls. But a new gift from the afterlife grants her the the option to be a girl for good. After returning to the present, in her new skin, she is  excited to start her new life with Jax, the human she had been majorly crushing over. However, Jax isn’t the same, and neither is anyone else. The only one to even recognize her is Idis, her witch. Something’s wrong, and Surla’s determined to find out why.

Read on to find out more about Molly, her books and where you can get them!

I love writing fluffy, quirky, paranormal books for teens. (I always have, too! :))

I like reading a range of teen fiction and chick-lit.

I think of “what if” scenarios, involving supernatural characters.

A girl wrote to me, saying she read BeSwitched 4 times in  3 days! I was blown away. I know BeSwitched is nothing epic; just a fluffy little book :0) I was so happy she liked it that much, to say the least.

I sit with noise all around me. I have twin boys and there’s always something going on around me. I like to snack, definitely! I can’t write with music playing, because I’d get swept away with it too much! LOL.

I do have a couple people read through it first. They are my beta readers, to check for errors in the plot, etc.

That’s a tough question. Would I sound to shallow to say Jacob Black?

The ending. I know the ending is so important to draw readers back to my series, so I want to make sure it makes a big impact. The beginning usually just comes to me.

Camilla Chafer has a very fun vibe, though I just started reading her stuff recently. I never thought of another’s work influencing me much. I kind of just write what I get a kick out of. But I love learning little techniques from any writer while I’m reading. I’m always aware of these things.

I used to coupon a lot, crochet a lot, go to the movies a lot. Now my writing takes up most of my time, outside of playing with my family.

Geez, that is a hard one. I won’t say I have a favorite book until I read one more than once. I’m a weird reader, because I never read a book more than once. I had a lot of fun with Rebecca Weinstein’s Yokai, though. She’s another indie author, too.

That they are for ages 12 and up. Some have their eight-year-old read my stuff, then get mad because of a kissing scene, etc.

Could you share a little of your writing with us?

Surla and Jax leaned into each other.  “I love you,” she whispered.

“I love you,” he whispered back, and his warm breath on her ear felt nice.

They closed eyes and locked lips. They didn’t let go throughout the entire count down.

Surla felt Jax’s lips part from hers and a strong wind blow. She slowly opened her eyes. Sure enough, she was back at Lake Sequoia as promised. She expected to see chairs and a buffet table set with China, silverware and fine foods. Most of all, she expected to a shocked congregation of Morreau witches and warlocks. There were no chairs, no dishes, no delicacies, and…

No sign of life, except for the tall fir trees that bordered the beach. Half-stunned, and sitting in the cold sand, she got to her feet and turned around. She was still wearing her heavenly blue dress she wore when transforming into a girl and looked up to the sky, expecting to see the spaceship somewhere. Waiting a few minutes, completely confused but with hope, she folded her arms to block some of the night’s chill. All she saw were constellations. Nothing moved; there were no airplanes, no shooting stars, no sign of Herman.

“It’s not supposed to happen like this,” her words cut the air and she was suddenly afraid. “Jax! Jax! Idis! Herman!”

There was no response. She started to cry. “Jax! Where are you?”

There was nowhere she could run to. Lake Sequoia was miles and miles away in the outskirts of town. Sitting back onto the sand and hugging her knees, she waited another ten minutes, then a half hour, and an hour went by with still no sign of the others.

She decided to walk the beach toward the road. She peered around once more through her wet eyes. Certainly, she was at the precise place where the Morreau Family Reunion took place. Certainly. It had the same crescent shape to the water’s edge with the same tuft of wild grass Idis hid herself in as a cat. As she stepped through the sand in some satin shoes, she watched as her feet made lone prints; the rest of the sand was smooth.

Soon making it to the dirt road, she decided to follow the fallen over green sign that pointed the  back to town.

As Surla walked, her feet ached more and more. Her shoes had no support. Searing spasms not only shot up from her soles to her calves, but from her thighs. There were no cars going down the lonely dirt road and the sounds of nature filled the air—Frogs croaking, crickets chirping, rustles through the brush. There was even an occasional hoot from owls.

It was all fine until she heard a deep-throated growl from beside a bush up ahead. She froze in place, afraid. Her irises morphed to slits like cat eyes as she zeroed in on the movement. She saw two glowing golden eyes, similar to her own, staring back at her. Out stepped something terrifying—a wolf.