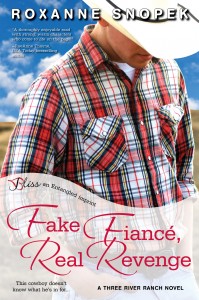 Real-estate tycoon Mitchell Granger has a problem. In order to secure a lucrative deal with an eccentric client, he told the teeny white lie that he was engaged…and now he needs to prove it. Even worse? The only name that came to mind was Sabrina Becker, the girl he was never good enough for growing up, and who still lives near his family ranch.

Sabrina doesn’t mind posing as Mitch’s fake fiancée—no, she doesn’t mind at all. One, she’ll make him pay with new construction for her business. And two, Sabrina’s got a plan to exact revenge on her first love, the boy who left her and Three River Ranch behind. She’ll pretend so well, he’ll fall in love with her…and then he’ll get a taste of what true heartbreak feels like.

But as Mitch sheds his corporate skin and picks up his dusty jeans and cowboy hat, will both his and Sabrina’s grand plans get derailed by love?

Roxanne Snopek is the author of ten books, more than 150 articles, and has had short fiction published in several anthologies. She is currently serving as Vice-President of the Romance Writers of America Greater Vancouver Chapter. She and her family live in the Pacific Northwest, where she’s at work on more love stories for Entangled Publishing.

Roxanne Snopek has been writing professionally for more than two decades and is the author of eight books, more than 150 articles, and has had short fiction published in several anthologies. Her non-fiction has appeared in a wide variety of publications, from The Vancouver Sun and Reader’s Digest to newsletters for Duke, Cornell and Tufts Universities. She’s done corporate copywriting on topics ranging from pet food for Iams/Eukanuba, to employee profiles for VersaCold to air-conditioner maintenance for Home Depot.

In 2006, her first novel Targets of Affection was published by Cormorant Books, under the name RGWillems. When her editor asked for more, she happily wrote the second and third in the series, certain she was on her way to fame and fortune. Then the economy fell apart, her editor stopped taking her calls and Roxanne realized it wasn’t going to be that easy.

In her spare time, Roxanne is also the human resource manager for a veterinary hospital. She and her family live in the Pacific Northwest, where she’s always at work on the next book.

On a personal note:

Take a look my blog*, in which I open up a tiny window into the uncharted landscape that is My Brain, while dancing between the boundaries of Too Much Information and Oops, Now I Need a Pen Name. Mostly it’s just Real Life, family, art, writing, yoga and why some mornings, you just shouldn’t talk.