Fantasy genre a fave of yours? Julia Suzuki visits this week to promote her series of fantasy books. Read on for more information! 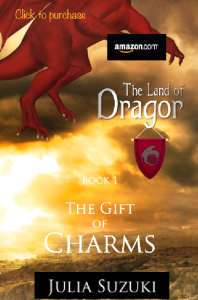 The Gift of Charms Book #1 is NOW available in paperback to PRE-ORDER at AMAZON HERE http://tinyurl.com/o95ufw9

‘It was during the time that my son was at junior school that I was inspired to write the first novel.  One day I had an epiphany – ideas came flooding in.

I had been thinking back to the wonderful vintage books I had read and wishing there were more like this – but with unique and modern edge and interactive web presence. I knew first hand what parents, grandparents and aunts and uncles were looking for when purchasing a book for their children, yet more than that, I also knew what adults sought themselves. They wanted gripping action, loads of adventure – all the classic aspects of  heroes and villains, mystery and magic, quests and suspense, and the hope of happy endings.

I wanted to write books with universal appeal, that were fantastical and ‘out there’ and yet still felt somehow real; to fulfil the expectations of book lovers and also hook  non-readers back into reading.  For me this had to be in the form of a series set in a place we would all be excited to visit – and so the Land of Dragor came to be’.

‘Many great creatures first roamed the earth with us,’ Ma’am Sancy announced to

her class, her wings held wide. ‘There were all different types. Some had trunks

and tusks as long as their bodies. Others had claws that enabled them to leap

through the highest trees in the forests.’ The younglings all gazed at their history

teacher, as her words captured their full attention.

‘At first they were happy to share the lands with us. But as the

years went by, the earth moved and the seas divided,’ she continued.

‘Some of the dinosaurs sought survival by breeding with our dragon

ancestors against their will creating a super-evil species known as

and destroy us!’ One of the orange Mida dragons gasped in horror at the

thought of such beasts.

‘But despite their efforts, and indeed after many great wars, both

dragsaurs and dinosaurs became extinct. It was only us dragons who

managed to survive the new climates, though we became slaves to man.

That is until one great rebellion, when after receiving a special gift we

managed to escape and flee to the Land of Dragor, where we now remain

hidden below the smoky mists.’

First came the whispers, then the rumours, and by New Birth’s Eve every dragon was

gossiping that Kiara had laid a strange egg.

Some said it was square, like the toffee-nuts gathered by the sweet-toothed

Bushki dragons. Whilst other dragons claimed they had heard a strange sound from

Kiara and Ketu’s cave as they had flown overhead, as if the egg was singing. And the

older dragons said it was the grey colour of a sickly hatchling, that when the shell

Each clan had its own Hudrah, who would watch over the births. But as the

night darkened on Kiara’s cave there was no sign of her coming.

Then a great crack echoed around the mountain.

The egg was hatching.

Kiara had not left nest for three seasons. She had sat patiently in the same

position day and night, feeding on mouthfuls of powdery quartz whilst hiding her egg

from prying eyes. Now she looked on with Ketu by her side as the shell opened.

It split into two, then four, and a determined little pink snout became visible.

Suddenly, a dark shape appeared at the mouth of the cave – Yula the Nephan

pecks inside an eggshell from far distances, whilst others thought it was the black

stones they wore around their necks that had magical powers to foretell a new birth.

‘Oh horror!’ she exclaimed. ‘It has cracked open already!’

Healthy dragon eggs were a delicate lilac colour, which after birth lay in pretty

pieces around the baby-pink hatchling, which within hours would change to one of

This eggshell was very different. It was every colour of the rainbow and

jewelled like the contents of a treasure chest. It swirled with yellow, green, blue and

violet and shone and sparkled in the firelight.

The pieces of the shell fell away.

others. The tiny dragon wiggled to dislodge the last piece of shell.

Kiara moved to help nudge it off with her nose, but Yula stopped her.

‘Let me see the hatchling make his own way,’ she insisted.

immediately scooped him up in great delight and nuzzled him.

‘Oh, isn’t he perfect?’ she exclaimed, holding him out to the others. ‘See his

Ketu looked at the newborn, full of pride. ‘Our beautiful son,’ he said

Kiara continued to smile. ‘Yoshiko,’ she said. ‘His name shall be Yoshiko,’

and with that she leaned forward to kiss her hatchling.

Then there was a flash of black.

For the first time in her history as a Hudrah, Yula had taken out the black

‘What do you mean by this, Yula?’ Kiara exclaimed. ‘Our hatchling is a

Yula shook her head slowly. ‘Step aside, both of you,’ she snarled. ‘Do not

obstruct the Hudrah in her work. This hatchling is cursed. It is my duty to protect the

clans of our land so I must take him away immediately!’

Kiara stared at Yula defiantly. ‘There is nothing wrong with my hatchling,’

she said. ‘Any who look at him would know he is a blessed creature. There is no need

for him to be carried away by the . . .’ But she could not even bring herself to say the

‘The black wicker basket is for the good of all,’ insisted Yula boldly. ‘Give

me your son, or I shall use my Hudrah powers to take him from you. Once the basket

has emerged there is no hope for this dragon.’

shoulder. ‘It has been too a long night for you, Ma’am,’ he said. ‘Thirteen births so

far and this your fourteenth.’

‘Our dragon is as normal as any young hatchling, who all come in different

shapes and sizes!’ continued Ketu. ‘As for the shell, please look again. It is only the

reflection of the flames that makes it glint strangely. Besides,’ he added, ‘you must be

tired and I have not yet paid you for your services.’