They called her Sleeping Beauty back at the lab. 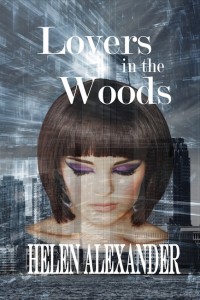 Nina has been asleep for a long time. Two hundred and fifty years, to be exact. She doesn’t change, and she doesn’t die. She’s always fifteen. All she wants to do is to wake up, but she can’t. Something – or someone – is keeping her in a perpetual dream state.

Leon is a programmer working for a security systems company in the Metro Palisade. His life is fairly ordinary and uneventful. But one day, things change. He begins to see a strange girl in his dreams. He knows she needs his help, but he doesn’t know who she is – or if she’s even real. Leon is willing to risk a lot to find out, and his curiosity finally gets the best of him. The mystery that surrounds Nina is greater than Leon had imagined, however: soon he’s on the run from the company he worked for, the police, the secret service and the criminal underworld.

All Leon wants is to save Nina from her endless sleep, but the price of that rescue could be a terrible one. Somehow, Nina is connected with the fabric of reality itself, and there are many dubious people chasing after the legendary Sleeping Beauty in the hopes of wielding ultimate power. When the world begins to fall apart with the sudden, inexplicable outbreak of war, only Leon holds the key to saving everything from complete annihilation – but, unless he can rescue Nina, it may already be too late.

Check out a sneak peek from this new addition to fiction:

She dreamed of a great city. It was a city she had never seen before, a city from the future. Nina would walk its streets, which were full of the strangest people she had ever seen. Some of them were not really people, even. There were things with extra arms, and eyes, and legs, insect-like things and bird-like things, but they all wore clothes and could talk intelligently. A Birdman called her over softly on one street corner and took her by the arm. He had bright red eyes, like those of an albino rat, and in his beak was an unlit cigarette. Nina was scared of him. “Please come with me,” the Birdman said, and they began to walk away down the street, hand in hand.

As they passed under a tall arc, which read, “Metro – Entrance,” the Birdman turned to Nina, and said: “Take the train to Stella Maris, Nina. He will be waiting for you. He will help you.” Nina was about to ask who “he” was, but she was already walking down the concrete steps. Just ahead, the multiple horseshoe arcs lit up the subterranean entrance to the Metro. An old-fashioned train whistle sounded. The high-pitched scream of the whistle echoed through the dark halls of the subway, announcing the approaching train as it pulled into the station: a fantastic, antique looking thing. Nina only had enough time to read the destination placard on its side. It spelled, in glowing letters, “Port Stella Maris.” Then she woke up. It was the same old room. Nothing had changed here. Nina looked up and saw the familiar pattern of the ceiling. One of her hands was lying freely now across the pillow. She followed the thin glistening tube with her eyes until they stopped at a small, translucent square bag suspended from a hat rack that stood in the corner. It functioned as a makeshift IV stand.

She was no longer dreaming. On the contrary, she felt more fully awake now than she had ever before in her life. The walls had gained solidity and color and suddenly came into focus, as it were. The ceiling began to pull away. It rose higher and higher, until it disappeared entirely from Nina’s view into a shrinking rectangle of black, revealing a crystal blue sky with white clouds drifting across it.

Nina shook her head. She wanted to get up, to take out the useless IV, but she couldn’t move. She kept looking at the sky. Several times, a Dutch Delta crossed it; a kind of passenger ship Nina had seen many times flying above the city. The aircraft cast its gigantic cold shadow into the room. When it finally passed, drifting very slowly, importantly, the room was once again full of sunlight.

“Hurry now, Nina,” she heard someone say; it was the Birdman. He had descended into the room through the ceiling. He had small, iridescent wings, like those of a hummingbird; they beat at an amazing speed, fanning the air. The Birdman approached her and pulled out the IV. He smelled of nectar. He picked her up in his arms and they flew out through the open ceiling.

The Birdman carried Nina to a beautiful bright building shaped somewhat like a horseshoe. It was a very tall building, and its exterior was paneled with black sheets of glass that reflected everything around it. As they approached, Nina could see the blue sky and the white clouds drifting mirrored across its surface. This Round House, as Nina called it, also lacked a roof, and they descended right through and landed on its upper floor, which was also a ceiling.

Helen Alexander is a writer and digital artist living in San Francisco, California. After graduating from the Academy of Art University, Helen worked as a video game artist in San Diego and Los Angeles. Currently she is back in San Francisco, at work on several new projects, including a comic book, a children’s book and a dark fantasy/horror novel. You can visit Helen at helenalexander.weebly.com for the latest news on upcoming releases, author interviews and previews of new stories and works-in-progress.