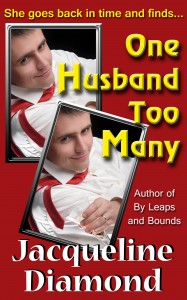 Blurb: One Husband Too Many (time travel)

Magic sends her back through time…to the rogue she’s trying to avoid! On the verge of a divorce, Jana Edwards wishes she could go back six years, before she met the stranger she impulsively married, and respond to the online profile of a farmer who sounded like an ideal husband and father. To her astonishment, her heirloom pendant grants her wish…but the “perfect” man turns out to be the same rogue, using another name and involved in a shady project. Jana knows Drake Edwards—intimately—but he has no idea who she is. And no matter how hard she wishes, her pendant refuses to send her home to the future. Could it be trying to tell her something?

Blurb: Out of Her Universe (real-world science fiction) 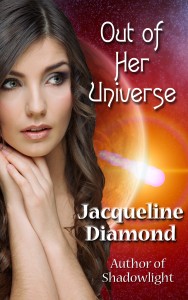 She has no idea she was born in another universe. Strange perceptions trouble artist Hannah Fleischer, but she’s found happiness in her engagement to a police detective. She has no idea that she was brought to California as a child from a parallel world where history has taken a dangerously different course. Then the link between the two universes reactivates unexpectedly. While a secret security team struggles to prevent an intruder from carrying out a deadly agenda, cascading events thrust Hannah, unprepared, into the center of a crisis that could destroy both her worlds.

Okay, nobody’s asked that question in so many words, but I see it on many faces when I admit that, although better known for my Regency and contemporary medical romances, I’ve also written a time travel romance (One Husband Too Many), an unusual science fiction novel (Out of Her Universe), plus a fantasy (Shadowlight), a horror novel (Echoes) and a Gothic romantic suspense with a ghost (Touch Me in the Dark).

Isn’t true life, with its tangled emotions and joyous discoveries, enough to challenge an author? Sometimes, sure. I enjoy finding new twists on secret babies, egg donors and multiple pregnancies in my long-running Safe Harbor Medical series for Harlequin American Romance (book 12, The Surprise Holiday Dad, comes out in January).

But when I was a child, my favorite stories involved kids like me who dropped into a fantasy setting or discovered fantastical friends in the real world. Maybe you too enjoyed David and the Phoenix or The Shy Stegosaurus of Cricket Creek, plus of course the Narnia series.

So it’s not surprising that every now and then an otherworldly idea pops into my head and refuses to go away. I love seeing people and events through the eyes of someone who doesn’t quite fit. It’s also great fun to drop my characters into situations they aren’t prepared for—can’t possibly be prepared for—and watch how they figure things out, react and grow.

During my early years as a novelist (I sold my first novel, Lady in Disguise, thirty years ago), genres such as science fiction and fantasy were clearly defined, with little room for crossover. Paranormal romances with shapeshifters and vampires, when anyone dared to write one, received nearly automatic rejections from publishers. Even time travel, with its deep roots going back to H.G. Wells and Mark Twain, rarely saw print until the 1991 success of Diana Gabaldon’s Outlander.

Then mainstream editors began taking a chance. One Husband Too Many, in which a six-year trip into the past reveals how little the heroine knows the man she’s about to divorce, was published by Harlequin in 1996. I recently updated and revised it for release as an ebook.

Now the dam has burst, allowing readers as well as writers to expand their horizons. When a book is so unusual it still can’t find a home, the author can self-publish, as I did with Out of Her Universe, which is my favorite of all my books. The story of parallel worlds in which history diverged eighty years ago and where most of us and our loved ones have a “twin,” it stretched my creativity and provided dramatic opportunities outside the usual reaches of fiction (imagine a world in which the Holocaust never happened, but it’s about to). It’s the book I kept haunting bookstores looking for and never found, so I wrote it myself.

Love, loss, dreams, the depths of terror and the heights of courage pull us out of our everyday existence and into a higher realm. That’s why fiction of all genres touches our hearts, speaking truths that transcend the mundane.

Authors find these truths at a subconscious level that defies explanation. So what’s a down-to-earth girl like me doing in a genre like this? Nurturing the creative spark that inspired me to write novels in the first place.

Jacqueline Diamond has published more than 95 novels, including romantic comedy, romantic suspense, fantasy, mystery, Regency romance and science fiction. A two-time finalist for the Rita Award, Jackie received a Career Achievement Award from Romantic Times and is a former reporter and TV columnist for the Associated Press. Jackie also writes the Safe Harbor Medical miniseries for Harlequin American Romance. Visit her at jacquelinediamond.com, or on Facebook at JacquelineDiamondAuthor. At Twitter, she’s @Jacquediamond. 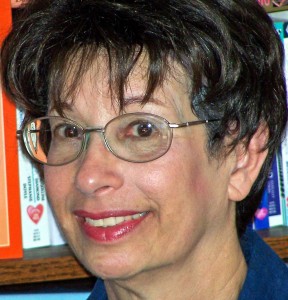