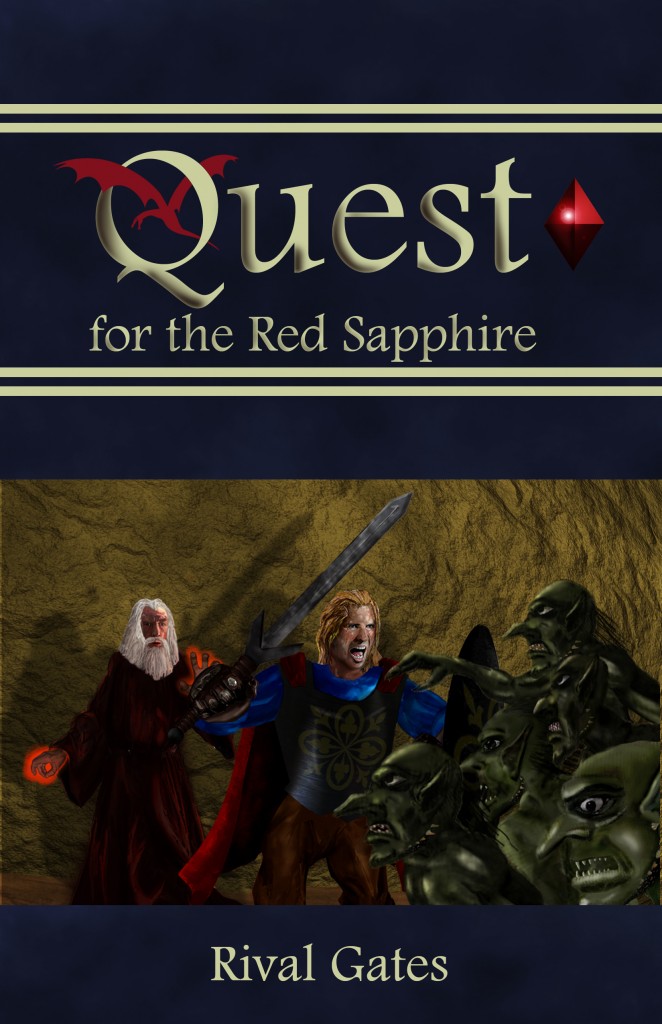 Former General Linvin Grithinshield is summoned home from the Goblin Wars after his father’s disappearance to run the family trading empire. Soon his mother is murdered and he is on the run with a price on his head. As a faceless enemy pursues him he must seek out the mythical Red Sapphire. In a world with enemies from without and within, he must set out with dragons in the sky and cutthroats all around to fulfill his destiny or die in the attempt.

“And you are avoiding my question!” stormed Linvin. “Answer me! Answer me! Is this what my father wanted?”

Anvar recalled the promise he made to Jelena. He sat down and rocked while biting the end if his pipe. Linvin sat down in the chair next to him and placed his head in his hands.

The rhythmic sound of Anvar’s rocking came to an abrupt halt. Anvar stroked his nephew’s hair and whispered a word in his ear, “No.”

Linvin’s head popped up and stared at his uncle. “Then what is this all about?”

Anvar returned to his rocking and puffing. After a few moments he formulated his words and spoke, “Your mother was absolutely set against your leaving. What you have been experiencing tonight is the life your mother has envisioned for you since you were born.”

“I can only hope his plan died with him. It was reckless and dangerous. With any luck at all, it would never bear fruit.”

“Just tell me, Anvar, what was his plan?”

“So what am I supposed to do?” Linvin demanded.

Anvar looked up at the sky. Only a few clouds obscured the view. At that moment, one of the clouds had hidden the reflection of the moon. “Look at the sky Linvin. Tell me, is the moon out tonight?”

Linvin leaned back and took in the sky. “Yes,” he answered simply.

“How do you know?” asked Anvar. “I do not see the moon anywhere.”

“It is right there,” pointed Linvin. “There are just some clouds blocking it from view.”

“But you are sure it is there?” asked Anvar. “Prove it to me. How can you prove that the moon is there?”

“Well,” Linvin said as he rubbed his chin, “We can just wait here until it comes out from behind that cloud. Then you will see it.”

“So even though the answer may be there all along, I will not be able to see it until the time is right?” Anvar asked.

“Well, of course,” Linvin stated. “Unless you believe it is there all the time, then your only choice is to wait for it to reveal itself.”

“So you are telling me that I must just believe the moon is there until it appears and proves it? You seem quite confident in the outcome. How do you know that the moon will appear again?”

“I do not know,” said Linvin. “I guess it just always comes out sooner or later.”

Anvar smiled and remarked, “And so will the answer to your question, my boy. The answer is out there. What you must do, is wait for it to present itself; just like your moon. Until then, you must believe the answer will appear.”

Some people turn to drugs or alcohol when life gets rough and things look gloomy. It is their way of escaping reality. I began writing as my own way to escape reality. Writing had been a favorite hobby as a boy. When times for my family became difficult, my mother suggested I pour my thoughts into creating a story rather than dwelling on the negatives in my life.

It was a wonderful idea. I created my own world with my own characters and my own rules. Soon the short story became a long one. Then it became a book. Next I planned a series of books to be written.

The main character of Linvin is one I created from my ideals for what a hero should be. He should be strong and intelligent but have his own flaws that get in the way of his greatness. Linvin is a character you can care about as he is ripped away from his family at an early age. In a similar way, I was sent to live with relatives for a time when my family was short on food. Linvin learns lessons through fights. I was tormented on the playground at school and fought nearly every day just to survive. I learned and hardened myself just as Linvin did. Later Linvin must take up a quest to make his life complete. I had to move beyond childhood and make a life for myself.

Is Linvin the same as me? I would definitely say not. He has traits that I do have, ones I aspire to have and ones I am glad I do not have. Linvin is a marvelous protagonist. As I said before, he is really someone you can root for in the book. You cannot have a successful book without having characters readers can invest themselves in during the story.