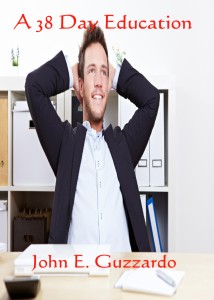 Today, the character of Craig Johannsen from A 38 Day Education has joined us to answer some questions about his life, his job, and what he does.

Hello, Craig.  Would you like to tell the readers what your role is in A 38 Day Education?

I’m the Senior Editor for The Scope newspaper.  My friend, Jay Ferragamo, offered me the job shortly after becoming Editor himself.  My job is simple – I am Jay’s conscience.  I am the one who stands on his right shoulder, figuratively speaking, and tells him when he’s doing something he shouldn’t.  Bear in mind, it doesn’t always work.  Jay’s pretty stubborn.

He’s a strange person to work for, but probably one of the fairest bosses I’ve ever had.  He doesn’t tolerate mediocrity, that’s for sure.  The only negative thing I can really say about him is he lets his passions govern him a little too much.  There’s a time and place for passion, and a time and place for wisdom.  Those are the moments you see just how young he really is.  All in all, however, he’s a pretty good boss.

Is there anyone on the staff of The Scope you don’t like working with?

Not really.  Our staff is still pretty new, so nobody’s really had time to piss anyone off.  I’m sure, given time, we’ll found our little pet peeves with each other but, honestly, I can’t think of a better team to work with.

What are your thoughts about your college President, Dr. Falconer?

This is the one area Jay and I greatly disagree.  Jay thinks all politicians are crooked, greedy, lying bastards.  My view of Dr. Falconer is that he is in an impossible job, and just makes the best of it.  There are moments I think his head is not screwed on straight but, hey, he’s a politician!

If you were told you had to go on a date with a staff member, who would it be and why?

Oh wow, that’s dicey!  I’m not big into office romances, but if I had to pick someone, it would probably be our Managing Editor, Anshana Davis.  For one, she’s a contradiction; an African-American conservative Republican.  Try finding THAT in your local hardware store!  Anyway, she’s a hot-tempered, intelligent, highly motivated woman who believes in working hard and not giving in to temptation.  Well, that’s how I see her.

There’s a rumor going around that Jay has a crush on someone in the office.  Is that true?

If that’s the case, I’m going to be the last guy to know about it.  If there is one thing Jay does NOT talk about with me, it’s his love life.

Do you think Student Government has treated The Scope fairly?

That’s a loaded question and I’ll tell you why.  Government and the press must be in an adversarial position because of the nature of what they do.  A government administers and exercises powers, whereas the press holds said government accountable for its decisions and how it executes its powers.  That said, I would say Student Government, despite its somewhat stilted view of its own importance, has gone out of its way to help us despite the battles Jay’s predecessor went out of her way to fight.  Whether that continues remains to be seen.

What are your favorite things to do when not hanging out in the office?

Grabbing a burger at Pompeii’s, watching a baseball game – lifelong Chicago Cubs fan here.  Yeah, I know – family is from Georgia but I love the Cubs.  Goes back to watching games as a kid on the cable channels out of Chicago.  Like to fish and go on the water.  Jay offered to take me on a fishing trip in Tampa one day.  I think I’ll gonna take him up on it.

What are your plans for life after college?

I am going to work on getting accepted into the Psychology Department at the University of Florida.  They have one of the better ones I’ve seen.  After that, probably get my Doctorate in Psychology somewhere and start a practice specializing in Christian Psychotherapy.  I truly believe that faith and science can work together in common cause, so what better thing to do than set the example.

Thanks for taking the time to sit down with us, Craig.  Anything else you want to add before we finish up?

Nothing I can think of at this time, except that Jay is a massive hockey fan.  He keeps hounding President Falconer to put an ice rink any new student center that gets built.  Maybe someday.  Anyway, great to stop by.  Thanks for the opportunity.

One thought on “Author John Guzzardo!”