Satyana – or Sati, as her friends call her – is a bold and alluring intuitive consultant, who’s smart, fiercely loyal, has a big heart and a knack for getting into trouble.

SATI AND THE RIDER: In her first adventure, a charming young man brings an 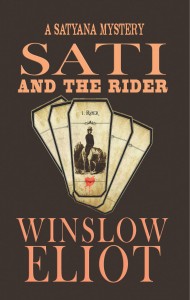 unexpected delivery and Sati’s life is changed forever. She’s thrown into an adventure of hide-and-seek, fraud, murder, and a strange cult, and she needs to use all her powers to follow a mysterious trail to its surprising end.

Winslow Eliot is the award-winning author of Heaven Falls, A Perfect Gem, Pursued, The Happiness Cure, and Bright Face of Danger (originally published by St. Martin’s Press 1993). Bright Face of Danger has been published in four separate French editions: as Fatale Vengeance (Harlequin) and, most recently, as L’Innocence du Mal (Mira Books). Her books have been translated into eleven languages and published in twenty countries.

Her greatest pleasure is entertaining readers with tales of romance and thought-provoking posts about writing in general, and poetry, teaching, and inspiration in particular. Her free online newsletter, WriteSpa – Oasis for Writers, welcomes visitors from all over the world. Besides writing novels and managing WriteSpa, she writes poetry, loves belly-dancing, 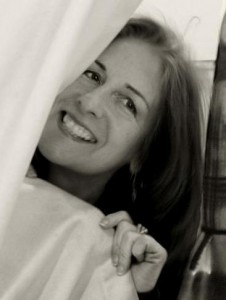 singing and playing guitar, Tarot and all kinds of divination, sacred places, reading, and people.

What is it about the wonderful world of intuitive consulting that’s so appealing?

If you’d like to learn more about the tools Sati uses in her sleuthing, especially the lenormand and tarot cards, there are many excellent resources, books, groups, teachers, communities, and helpers.

But if you’d rather simply continue your exploration in the smartly-gloved hands of Satyana, she’ll be back soon with her next adventure: SATI AND THE CLOVER.

Purchase Sati and the Rider on Amazon: http://tinyurl.com/pn2ms3l

Sneak Preview of SATI AND THE RIDER: :

I don’t often get men as clients. Usually if a man shows up for a consultation, it’s because his girlfriend or wife pushed him to it.

When they do come in, they tend to be reluctant, or skeptical, or nervous.

But Joel Wakefield was different. Not that he was chatty or curious. No, he was chilly and dry as unbuttered toast in an Italian marmalade suit, a beige cashmere coat draped over his arm, fawn leather gloves, somewhere between forty and fifty, with an ultra-smooth chin that jutted aggressively.

He certainly was not reluctant or nervous. He set down his gloves and a manila envelope on the mantel, and frostily asked me to advise him on whether or not he could trust—completely—one of his employees.

I like to get to know my clients before I dive right into a reading, so after inviting him to sit down, I asked him what kind of business he was in.

I refrained from making a joke, since he didn’t seem the humorous type, and grew quiet inwardly. I’d been giving readings for people for so long that by now it hardly took more than a minute to grow still inside. When I was ready, I checked a sample of his dubious operative’s handwriting, which I had the foresight to ask him to bring. I checked the o’s and a’s first—no loops. They were closed, too, so I could tell he wasn’t much of a talker. But they were clean and clear, so I knew he wasn’t hiding anything from his boss.

The answer was unequivocal: yes, his employee, Simon Jones, could be trusted completely.

But I didn’t make my answer unequivocal. Whenever I was asked questions of this kind, I really needed to be absolutely sure, because Joel Wakefield implied he was trusting this employee with large sums of money.

And, more importantly, I didn’t want him to walk out without paying for the full hour appointment. I seriously needed the money.

So I did a little scrying with the crystal ball, and studied the tarot spread I laid out on the low oak chest between us. The 10 of Swords seemed to vibrate and shift slightly and I turned my attention to it. The exhausted figure sprawled face-down on the hard ground in a pool of crimson. Something coming to an end.

I turned back to the handwriting and recognized signs of repressed anger.

Another thing I noticed: the writer was depressed. Aggressive, but I could easily glimpse his feelings of hopelessness and despair. The jagged phrases sloped down to the right—almost off the edge of the page.

But when I began to say some of this out loud, my client reminded me sharply that he was not asking about the mood of his employee. All he was asking was whether or not he could trust him.

“Yes, you can trust him,” I said finally, confidently, toward the end of the hour. “Simon Jones is a good guy. Is there anything else you’d like to ask me?”

He assessed me silently, as though I were a department store suit on a hanger. His bronze shoes gleamed in the low light. He was sitting with one leg crossed over his thigh so I could see the shine on the leather sole. It was barely scuffed.

I wondered what he was waiting for, because our hour was up and I was expecting my next client at noon. I glanced at the clock on the wall, making a point. He saw me do it and a dimple creased his cheek as though he was trying to smile but it hurt.

He didn’t look like he intended to leave. There was definitely something else on his mind.

“Yes?” I prompted. “There’s something else?”

The hostile eyes flickered, almost softened, like a ripple in a pale gray sea. But then they froze again and he said, “Yes, there is. I want you to find my daughter.”