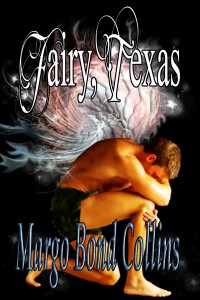 Laney Harris didn’t want to live there. When her mother remarried and moved them to a town where a date meant hanging out at the Sonic, Laney figured that “boring” would have a whole new meaning. A new stepsister who despised her and a high school where she was the only topic of gossip were bad enough. But when she met the school counselor (and his terminal bad breath), she grew suspicious. Especially since he had wings that only she could see. And then there were Josh and Mason, two gorgeous glimmering-eyed classmates whose interest in her might not be for the reasons she hoped. Not to mention that dead guy she nearly tripped over in gym class.

She was right. Boring took on an entirely new dimension in Fairy, Texas.

Margo Bond Collins has graced the website this week with her brand new book- Fairy, Texas. Try this free excerpt on for size:

Fairy High could have fit into one wing of my old school. The three-story, red brick building looked like it had been around for at least a century—it actually had carvings over two of the doorways that read “Men’s Entrance” and “Women’s Entrance.” I was glad to see that none of the kids paid any attention to those instructions.

“Counselor’s office,” I muttered to myself. At least I wasn’t starting in the middle of a term—though given the fact that there were fewer than 500 students in the entire high school, I didn’t think I was going to be able to go unnoticed, even in the general bustle of the first day back from summer vacation.

I walked through the door marked “Men’s Entrance,” just be contrary, and faced a long hallway lined with heavy wooden doors. The spaces in between the doors were filled with lockers and marble staircases with ornate hand-rails flanked each end of the long hallway. Students poured in behind me, calling out greetings to each other and jostling me off to the side while I tried to get my bearings. None of the doors obviously led to a main office; I was going to have to walk the entire length of the hallway. And people were already starting to stare and whisper.

God. I hated being the new kid.

I took a deep breath and stepped forward. I made it halfway down the hall without seeing anything informative—all the doors had numbers over them and many of them had name plaques, but neither of those things did me any good since I didn’t know the name or office number for the counselor. I was almost getting desperate enough to ask Kayla, but of course she was nowhere to be seen.

I turned back from scanning the halls for her and caught sight of the first adult I’d seen—and almost screamed. As it was, I gasped loudly enough for a guy walking past me to do a double take. The man standing in the open doorway was tall, over six feet, and way skinny—so emaciated that it looked like you ought to be able to see his ribs through his shirt, if his shirt didn’t hang so loosely on him. He had white hair that stuck out in tufts, thin lips, a sharp nose, and pale blue eyes that narrowed as he watched the kids walk past—and all the kids gave him a wide berth without even seeming to notice that they did so. He stood in an empty circle while students streamed around him in the crowded hallway.

But none of that was what made me almost scream.

For a moment, just as I’d turned toward him, I could have sworn that I’d seen the shadow of two huge, black, leathery wings stretched out behind him.

Pick it up here : http://www.amazon.com/Fairy-Texas-Margo-Bond-Collins-ebook/dp/B00I7BTMJ4/

Margo Bond Collins is the author of a number of novels, including Waking Up Dead, Fairy, Texas, and Legally Undead (forthcoming in 2014). She lives in Texas with her husband, their daughter, and several spoiled pets. She teaches college-level English courses online, though writing fiction is her first love. She enjoys reading urban fantasy and paranormal fiction of any genre and spends most of her free time daydreaming about vampires, ghosts, zombies, werewolves, and other monsters.

Be sure to add Fairy, Texas to your Goodreads bookshelves: https://www.goodreads.com/book/show/19502285-fairy-texas