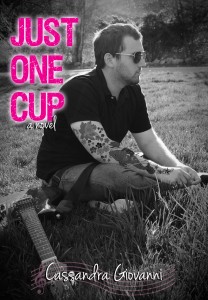 Emma Walker was a writer who’d lost herself to someone else’s anger–who had given up on ever feeling like herself again.
Evan Levesque was a rock-god–the one all the woman wanted, but he’d never gotten used to the loneliness between the stage and real life.
With just one cup of coffee they’ll begin a journey of self-discovery at each others sides, but can Emma handle Evan’s fame while dealing with her own demons? Emma’s checkered personal past, a bad relationship that haunts the edges of her memories, threatens to make everything implode on them when Evan takes matters into his own hands.
Sticks and stones may break my bones, but your words…they’ll destroy my soul–Can Emma handle being put back together and facing who she’s become because of it?
GENRE: New Adult>Contemporary Romance

Cassandra is a freelance professional photographer known for her automotive, nature and architectural shots. She is the owner of Gio Design Studios, a photography and publication marketing company that designs covers and marketing materials for authors utilizing the company’s photography. She is currently studying to receive her associates degree in Marketing. Cassandra is happily married to the man of her dreams and they live in the rolling hills of New England with the other loves of her life their dogs, Bubski and Kanga.