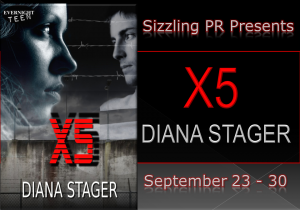 I had the privilege of hosting author, Diana Stager, and having her contribute a blog and some extra info on her hot new book, X5. Read on for a sneak peek!

I think every author begins their career with dreams of selling millions of books and becoming an overnight sensation. We all quickly realize that that only happens in fairy tales (unless your name is E.L. James). It takes a lot of hard work, dedication, and the ability to continue producing work that people want to buy. It doesn’t happen overnight, but success will come to those who work for it. I decided to tell you about recently meeting my all-time favorite author and shining example of what can happen given enough time. Kelley Armstrong is the NYT best-selling author of the Darkest Powers trilogy and the Darkness Rising trilogy for young adults, as well as the Women of the Otherworld series for adults. In addition, she’s started a new adult series about a woman who finds out her parents are serial killers, and a middle grade book based on Norse mythology.

Last week, Kelley was doing a signing at a bookstore near my house. I was lucky to get in because a kind soul had given an extra ticket to the staff in case anyone needed one. And I did! The line-up to get in went down the entire block and it made me think about the first time I went to see her do a signing about seven years ago. For that appearance, there might have been twenty people in the store. It amazed me how much more popular she’s become since then. And rightly so, because she’s an incredible writer.

Luck continued to be with me that evening because Kelley always brings swag with her to her appearances and gives them to people who ask questions. Well, she picked me to answer a question, and I went home with an Advanced Reading Copy of her next release, not out until November! It’s the final book in a series about a hitwoman. And of course, once I started reading, I couldn’t put it down, staying up until three in the morning to finish it.

I will continue to go to Kelley’s signings when I can, because I can’t ever imagine getting tired of it. And even though the crowds have grown, she continues to spend time talking to each reader, answering questions, and personalizing every autograph. I have more than 10 books signed by her and they’re all different. As an author just beginning my career, it’s inspiring to see someone who’s become so successful. I know it could be years before I can line people up around the corner for a signing (people who aren’t related to me anyway), but it’s possible. And maybe someday there will be readers out there who stay up all night to read my latest release, and who will come to as many signings as they can. I hope you enjoy reading X5 as much as I enjoyed writing it!

Being a socially awkward geek with anger management issues has made Travis Armstrong an outcast, but on top of that, he has visions of the future. Not that he can tell anyone, except in an anonymous online forum. When he takes a chance and meets with another group member, he winds up at The Bunker, where everyone is like him, and where, finally, he feels like he belongs. 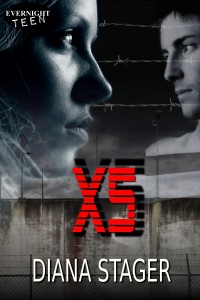 Tara Gage has been at The Bunker since she was thirteen years old. Even among the residents there, she’s unique, and her special talents lead her to discover that The Bunker is not the safe haven it seems to be. She’s determined to escape and get back to her family.

When they each have visions of the other’s death, Travis and Tara know they have to run. With their captors desperate to get them back, they must rely on each other to get away before their visions become reality.

My foot jiggled in time to the song running through my head as I waited for my turn at the polygraphs. Travis was nowhere to be seen, and I was glad of that. Or that’s what I told myself whenever I became aware of my disappointment at not seeing him. He drove me crazy, and really didn’t seem at all exceptional, but a growing part of me didn’t care about that, and just longed to be near him. Disgusted with myself, I tried to think of something else.

My thoughts were cut short when Travis and Mike entered the hallway, both looking upset about something. Their friendship puzzled me. I know Mike was trying to prod Travis into being more of a leader than a loner, but as far as I was concerned, it wasn’t working. He was too introverted, too willing to follow along with what the rest of us were doing, or else go off by himself. Both of them sent anxious glances my way, setting me on edge, and just as I stood to go talk to them, the attendant called my name. Casting a last look their way, I turned and entered the polygraph room.

I tried to get through it as quickly as I could so I could find out why Mike had looked so worried. Of course, because I was in a hurry, things took twice as long as normal, and every second wasted irritated the crap out of me. By the time I returned to the hall, Mike was nowhere to be seen, and Travis was pacing back and forth. It seemed I had no choice but to talk to him.

Taking huge strides, I made it to Travis’s side quickly and tapped him on the shoulder. When he turned, I hesitated for just a moment when my eyes locked with his, my stomach fluttering. Pull it together, Tara! I took a breath and then said, “What’s up with Mike?”

Travis’s eyes darted around and he turned to look over each shoulder before giving me a weird look. “Not much,” he said finally, though he seemed to be trying to communicate something with his eyes. I frowned, and watched as his eyes widened, then darted to the side, his eyebrows lifting and then drawing together. What the hell? I shrugged and shook my head. Whatever he was trying to tell me wasn’t coming across at all. He sighed and opened his mouth to say something else when something behind me caught his attention.

Turning, I saw a couple of armed security guards rushing into the polygraph room Mike had gone in. Remembering Cam, a band tightened around my stomach as my heart began to pound. Security only came to the polygraph rooms for one reason, and my fears were confirmed a moment later when they exited, holding Mike in between them.

“Mike!” I screamed, leaping forward to try to get to him. They couldn’t be taking him away! What had he seen? My efforts to reach his side were blocked when Travis grabbed me from behind and wrapped his long arms around me. “Travis, let me go! Let me go!” I struggled against his grip, but it was like iron and I was getting nowhere. Lifting one foot, I kicked backward and connected with his shin. I heard him swear, but he didn’t loosen his hold on me.

“Tara, stop,” he whispered in my ear. “He knew this was going to happen.”

I ignored him and screamed after Mike again. The security team nearly had him to the entrance to the administrative section of The Bunker. “No!” I yelled. “No, you can’t take him! Mike!”

His eyes were full of pain when he turned to look at me one last time. I saw his mouth form the words, “I love you.” And then the door slammed closed behind him. Hot tears streamed down my cheeks, my heart ached, and though my throat was raw and sore, I couldn’t stop screaming. Travis wouldn’t let me go no matter how hard I pulled against him. My squirming and wiggling wasn’t doing any good, but I couldn’t stop. The rational part of my brain knew that Mike was gone and nothing I did would help, but at the same time if I didn’t try, I’d be giving up.

Suddenly I felt a sharp pain in my arm and when I turned my head, I saw one of the infirmary staff standing with a syringe in her hand. I tried to say something to her, but the edges of my vision were going fuzzy, and then everything went dark.

Diana Stager never met a book she didn’t like. An avid reader from a very early age, she discovered she loved writing her own stories down. She dreamed of being able to write a book, but more sensible ambitions shoved that dream onto the back burner. Over the years, she dabbled with the written word, but always had difficulty finding the right story. Then, one day the light bulb went on, an idea was born, and the rest is history (so cliché but so true).

Diana lives in Cambridge, Ontario in a house full of books. In the space that’s left, are her husband of 13 years, two children, and a cat, all of whom are adorable. She used to have a creepy fish, but sadly, he now swims in the big tank in the sky. She’s an elementary school teacher, who loves music and art.

One thought on “X5- Diana Stager”